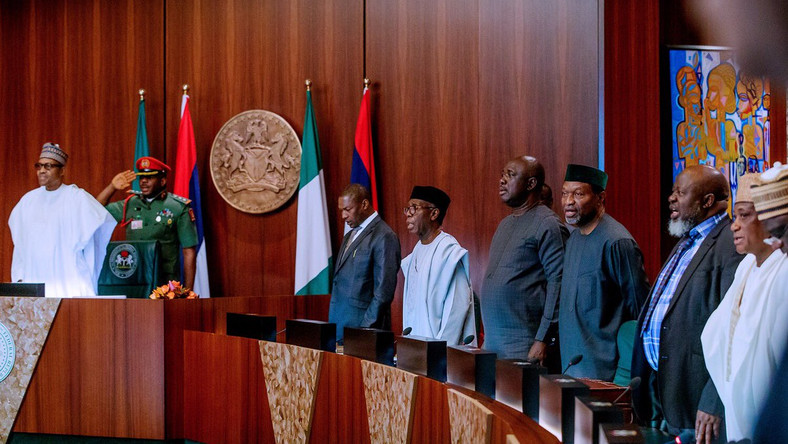 One of Buhari’s ministers who asked that his name be left out of this story, told Eyes Of Lagos at the Eko Hotel in Lagos on Monday, April 15 that the president has left all of his cabinet and kitchen cabinet members guessing and trembling.
“My brother, no one knows what’s going to happen. It’s even more interesting because the man (Buhari) didn’t reshuffle his cabinet since 2015. Some of us are genuinely afraid. It’s like he was waiting for the election to be over to finally show his hand and kick under-performing ministers out. Now, we are almost there”, the minister, who craved anonymity for this story, shared. 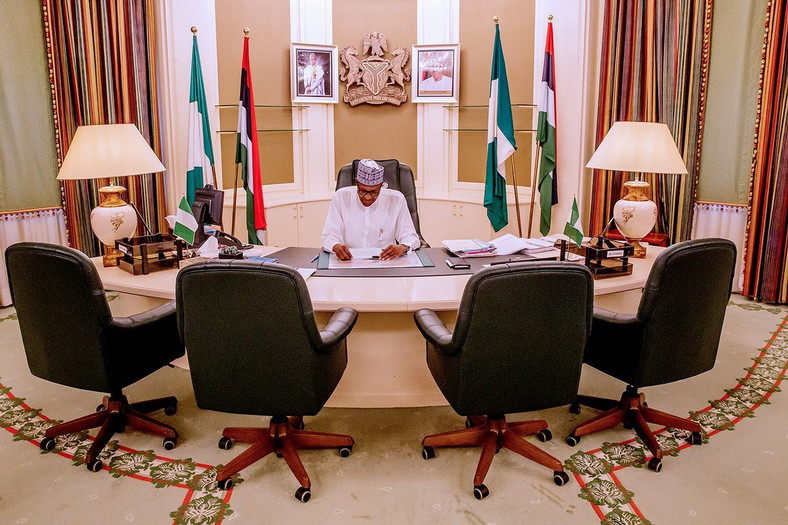 President Buhari in his office. He has a new cabinet on his mind, surely (Presidency)
Presidency sources tell Pulse that Buhari has kept his plans bordering on the assemblage of a new cabinet, very close to his chest. Not even ministers considered ‘close’ to the president, have been handed a clue.

Even Amaechi has no clue

Minister of Transportation, Rotimi Amaechi, told Pulse during an exclusive chat recently, that President Buhari hasn’t assured any minister of their job security in his second spell at the helm.
“With what you’ve done so far, can we say you are coming back?”, Pulse asked Amaechi above the chugging hum of the train, as the minister inspected the Itakpe-Warri rail corridor.
“I will show you the president so you can ask him”, Amaechi said through barely concealed laughter. “Nobody can answer that question because the president is not telling anybody who is coming back or who is going. Or whether all of us are going. Nobody knows”, Amaechi said.

The reign of eye service

Pulse understands that ministers have been going round the country to inspect projects and fire up contractors to ramp up pace of work at project sites, all in a bid to retain their portfolios or retain their jobs in the current set-up. 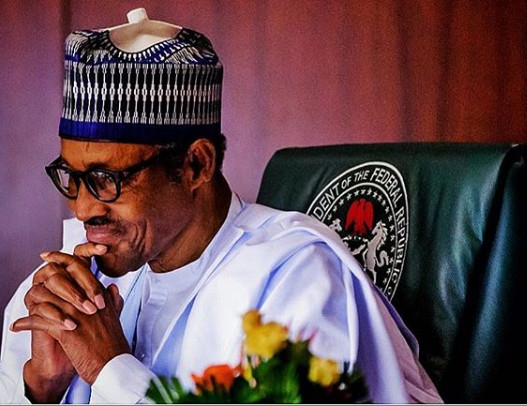 President Muhammadu Buhari before a cabinet meeting [Twitter/@BashirAhmaad]
“Some of them are doing ‘eye-service’ now but it’s not bad, if that means projects are completed and service is delivered to the Nigerian people”, one media aide of President Buhari shared, before revealing that some ministers will of course be asked to go.
“Not everyone will come back. You can actually put your money on that”, the aide offered.

President Buhari was elected for a second term in office on February 23, 2019, after beating closest challenger, Alhaji Atiku Abubakar of the PDP, with over 3 million votes.
Inaugurated president on May 29, 2015, Buhari only revealed his ministers and their portfolios in November of 2015, as Nigerians railed and wailed in the face of the delay.
Economic pundits partly blame the delay for why Nigeria plunged into a recession as soon as Buhari assumed the reins, with investors waiting for policy direction from the new president before deciding whether to hedge their bets on Nigeria or not. 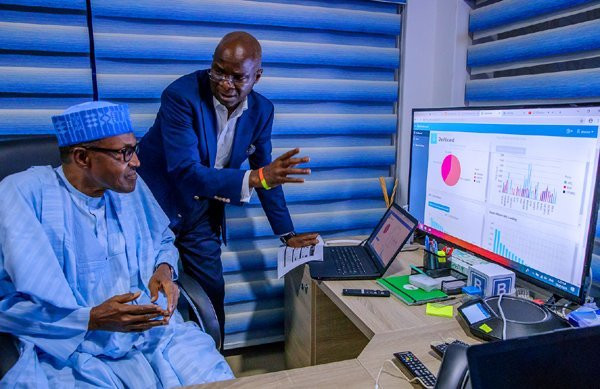 Power, Works and Housing Minister, Babatunde Fashola, takes Buhari through the election campaign operations (Presidency)
Opinions remain divided on whether a cabinet that took six months to be revealed, has delivered on the job.
Buhari’s first term cabinet was loaded to the hilt with politicians, at a time when technocrats would have sufficed. It remains to be seen if his second cabinet would be any different.
Analysts say the president used his first term cabinet to settle political debts and appease the patronage network that underpins governance in Africa’s most populous nation.
Nigeria’s constitution allows for one minister to be named from one of the country’s 36 states, for purposes of fair representation and a reflection of “federal character”.