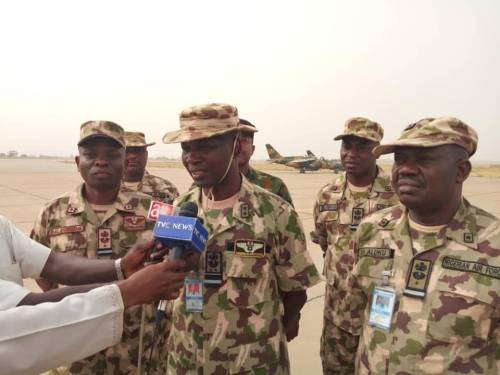 Troops of the Nigerian Army attached to Operation Harbin Kunama 3 have arrested the traditional heads of Doka and Mutu villages in Gusau Local Government Area of the state, accusing them of serving as informants to bandits.The Army confirmed the arrest in a statement issued on Monday.Six bandits was shot dead in Kirsa and Sunke villages in the Anka Local Government Area of Zamfara State during a gun battle.

Two weeks ago, Mansur Dan-Ali, the Minister of Defence, had said some traditional rulers in Zamfara and the North-West region were helping some bandits to perpetuate criminal activities.

The Zamfara State Council of Chiefs denied the allegations.Moreso, the Nigerian Army said apart from the arrests of the leaders of Doka and Mutu villages, whose names were not disclosed, the troops apprehended 16 other suspected informants and errand men to the bandits.The Army said: “Troops on Operation Harbin Kunama 3, based on credible intelligence about bandits’ movements in Kirsa and Sunke in the Anka LGA, continued with a clearance operation into the hinterland to clear the brigands.“Consequently, the troops engaged the bandits in a shoot-out at the bushes of Kirsa and Sunke villages which resulted in the extermination of six criminals, the recovery of two AK-47 rifles and two motorcycles.“In Doka and Mutu villages in the Gusau LGA, troops also had a serious encounter on Saturday with a group of bandits which lasted for about two hours.“The brigands were armed with sophisticated automatic weapons, but they were overpowered by the troops, forcing them to flee from their hideouts. Eighteen suspected informants to the bandits were arrested, including the village heads of Doka and Mutu villages.“The Force Commander, Major General Hakeem Otiki, said the troops would continue to go after bandits in Zamfara and the contiguous states of Kebbi, Katsina and Sokoto.”