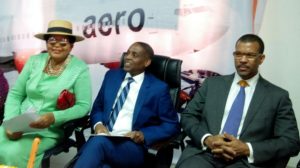 Nigeria’s oldest surviving carrier, Aero Contractors Ltd., on Tuesday celebrated its 60th anniversary of flight operations in the country. Speaking at the ceremony, Capt. Ado Sanusi, Chief Executive Officer, Aero Contractors, said the airline which began operations in 1959 had hugely contributed to human capacity development in the aviation sector. Sanusi said the airline had an enviable safety record with zero fatalities since it began both commercial flights and helicopter charter services. He, however, noted that Aero had faced hard times from February 2013 to August 2016, which led to its takeover by the Federal Government through the Asset Management Company of Nigeria (AMCON). Eyes Of Lagos gathered that, According to him, the AMCON intervention was aimed at returning Aero to profitability through repositioning of its operations and expansion of its portfolio of services. Sanusi therefore, said the management had to make tough choices to sustain and stabilise the airline’s operations and ultimately return it to an active player in the Nigeria’s aviation sector. He said: “It is my sincere pleasure to inform you all that like a phoenix, Aero has risen from its hard times. “Our individual and collective sacrifices, resilience and insistence that this airline is lifted back up is paying off and yielding visible results.” According to him, the airline services has since December 2016, returned to full operations and grown its fixed wing operational aircraft from one to four. “It is our expectation to grow our fixed wing aircraft to six by the close of this year. The present count of four aircraft improved our domestic flight operations to 32 daily. “From one helicopter in 2017, we now have five operational helicopters with capacity to further grow this number to 10 helicopters by close of the year so as to deepen our services. “In all, we began our repositioning journey growing our domestic operations from eight to 32 daily flights. “From ferrying 8,000 passengers per month, to 52, 000 passengers per month into and out of the several airports on our route,” Sanusi added. He disclosed that the Aero Aircraft Maintenance Organisation which was approved by the Nigerian Civil Aviation Authority (NCAA) to carry out C-checks on Boeing 737 Classics had helped to turn around the fortunes of the airline. Sanusi said Aero had successfully conducted C-checks on 737 CL Boeing aircraft and had secured approval from the Governments of Ghana and Democratic Republic of Congo to carry out C-checks on B737 aircraft registered in the countries. Speaking on behalf of the Ibru family, Mrs Cecilia Ibru, former Managing Director of the defunct Oceanic Bank, commended the staff of the airline for putting in their best towards sustaining its operations. Ibru also acknowledged the role played by the incumbent Aero management in repositioning the airline and restoring the confidence of the flying public in its operations. Eyes Of Lagos reports that Aero Contractors was first formed in 1959 in the Netherlands before being officially registered in Nigeria in 1960. At inception, it was wholly owned Schreiner Airways B.V. of the Netherlands. Aero later became a partly Nigerian-owned company with an initial 40 per cent Nigerian shareholding in 1973. This grew to 60 per cent by 1976 in fulfillment of the requirements of compliance with the Nigerian Enterprises Promotion Decree of 1977, also known as the Indigenisation Decree. By January 2004, Schreiner Airways was bought over by CHC Helicopter which acquired a 40 per cent holding in Aero. while the 60 per cent majority share remained within the lbru family. By July 2010, CHC sold its interests in Aero and the airline became wholly owned by the Ibru family until it was taken over by AMCON in 2013 due to its huge indebtedness.