Libya to deport another 131 Nigerians 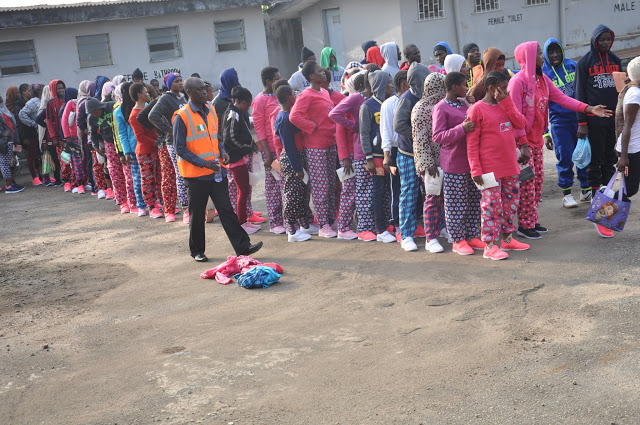 Another batch of 131 Nigerians would be deported into the country on Wednesday, May 22, 2019 from the North African country – Libya.

The impending returnees, consisting of males, females and toddlers are expected to land in the country at 9pm on Wednesday through the Murtala Muhammed International Airport (MMIA), Lagos.

Eyes Of Lagos gathered that, A source close to one of the security agencies at the Lagos Airport, confided in our correspondent that a chartered aircraft, a Boeing 787-800, belonging to Buraq Airlines with the registration number 5ADMG would return the deportees to Nigeria.

The Nigerians are being deported from the war-torn North African country for illegally entering and residing in Libya.

The stranded Nigerians would be assisted back to the country through the humanitarian efforts of International Organisation for Migration (IOM) and special funding from European Union (EU) for reintegration process for the voluntary returnees after their futile attempts cross over to Europe through Libya.

The source told our correspondent that all the security agencies at the Lagos Airport had been notified of the impending return of the Nigerians.

Besides, it is expected that officials of National Emergency Management Agency (NEMA) would receive the deportees on arrival in Nigeria.

It would be recalled that the exercise has been ongoing since 2017 with the 66th flights performed late last month.

As at the last time, over 13, 000 Nigerians have been returned to the country through the exercise.

Most of the returnees had planned to use Libya as a departing point to Europe, but were later stranded in the North African country.

2 thoughts on “Libya to deport another 131 Nigerians”