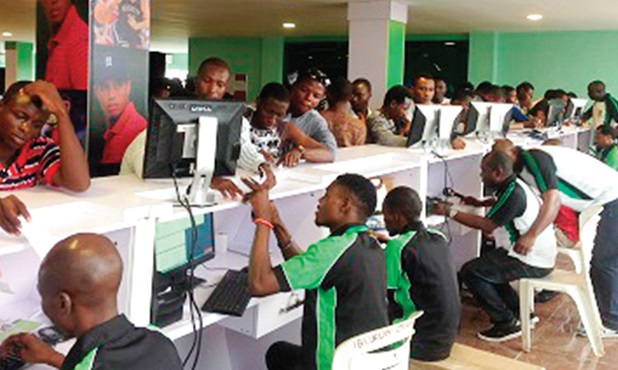 Data also revealed that over 60 million Nigerian punters spend over 3, 000 naira daily placing bet stakes. At least there are 50 betting sites in Nigeria with the number growing annually.

Respondents, who spoke with the Eyes Of Lagos , said they placed bets to generate quick and easy income, and turn their passion for football into cash.

28-year-old Fashion designer, Segun Mukoro who bets at least once weekly said that it was the fastest way to double his income and although he might lose sometimes, the wins come big.

He said, “Yes I bet and I do so weekly, especially when there is a league playing. When you have been betting for long, it’s easier to know what odds to play and what teams to bet on.

“It is a guessing game and you get better with time. I know that it is addictive but I see it as an investment, a way to double my income,” Mukoro said.

Similarly, 23-year-old Eronini Kolapo explained that he used betting to augment his allowance as a student. He narrated that he started for fun, at first but soon built a network from it.

Kolapo’s almost-perfect predictions made him a leader of his sport betting ring where his peers pay him extra to place ‘sure’ bets for them.

His model is not strange as website and online channels where predictions are sold to help punters maximise betting stakes, populate social media.

However, there are tons of fraudulent platforms.

30-year-old Noble Obioria sold his agro-business and combined the proceeds with his savings to purchase predictions from a fraudulent channel that swindled him.

He told Eyes Of Lagos that losing all his money helped him realise how addicted he was to betting and how much he had given to the greed and dissatisfaction that came with regular betting.

Obioria also agreed with respondents who said that the presence of betting sites and platforms online made it too easy and fuelled the desire to place stakes.

Research statistics show that over 14 million bet stakes and payments are made over the internet every day. This, however, does not affect the rate of teeming punters at offline, physical shops.

A betting shop attendant, Niyi Adejujagbe said that he gets at least 500 stakes placed in his shop daily, adding that he has a crowd of punters as early as 9 am.

He said, “People place bets here every day. They still use shops very well because some don’t know how to use the websites and other people like to see their paper bet slips.”

Eyes Of Lagos reports that in five betting shops visited, there were only two women placing bets each a part of two male-dominated groups.

Jennifer Olisa said she enjoyed the process as she loved football and wanted to make money from it.

On the low participation of women in betting, she said women try to be more careful, especially with money.

She added that she took the risks to bet as her prediction most times, worked. However, she gets help from her male friends who had been betting for longer.

A psychologist, Dr Aimua Cole said that betting and gambling had high tendency to lead to depression in addicts, adding that it takes a toll on victim’s mental health.

She said, “Gambling addiction could lead to other serious effects, including loss of jobs, failed relationships, and severe debt.

She also decried the high advertising rates of betting sites glamourized the habit, leading more young people to indulge in the addictive act.

This fourth season tagged ‘Pepper Dem’ designs games where housemates win Bet9ja coins with which they can purchase favours.

Meanwhile, outside the house, fans are encouraged to place bets using the links of the 25 housemates that were introduced into the show to support their favourite housemates.

One thought on “Nigerians Spend N730bn On Sports Betting Annually”