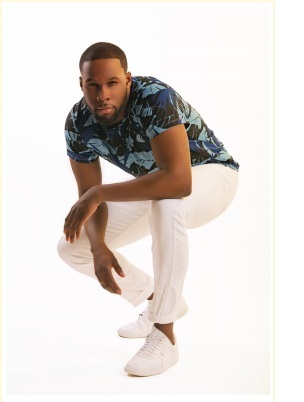 DENY IT, TEFO’s is about leading with love, being positive, and steering away from some of the superficial aspects of life. Get DENY IT Here

Who is TEFO? Reminding us that music is the secret ingredient to bridge gaps and bring people together, TEFO is an artist not to be missed.

PLAY PLAY, his debut single written by TEFO and produced by MVGIC amassed over 43,000 views and streams, with international popular radio play. Get Play Play Here

DECLINE, his follow-up single with its catchy and signature dance move, amassed over 100,000 views and streams on all platforms, with international popular radio play, trending in South America, Africa, the Caribbean, Europe, and the UK. This song takes us to the woes of relationships post-break-up, from a females perspective. Get Decline Here

TEFO [Truth, Enlightenment, Freedom and Opportunity] is a professional singer, songwriter, music producer, and entrepreneur. TEFO’s openness, raw emotionality and clever wordplay, narrates lived-in stories with magnetic sensitivity that provoke thought and set aside all your inhibitions, from the get-go. \

TEFO’s Caribbean and African descendent introduced him to an array of conscious music and beat genres that shy away from the ordinary from a young age. It was at the tender age of seven while banging on his grandmother’s kitchen pots, he understood how sound can come together to stir emotion and entertain. As a child gifted with an inquisitive mind, the artist shares it was Ryan Leslie’s beat-making videos on YouTube that forever changed the course of his artistic career. “I saw that he was able to produce songs from the beginning to end, write it and produce it, record it, all in one session. That’s what really inspired me. I wanted to be able to do the same” — the artist shares. Opening the floodgates for his creative self-expression, TEFO began to craft and produce his own beats, collaborating with singer-songwriters, vocalists, and rappers from the age of ten. Consolidating years of artistic development, TEFO shares his personal growth and passionate evolution onto the discovery of self and how to connect with others. Influenced by timeless classics and new rhythms alike, TEFO’s unique sonic fingerprint merges old worlds, such as Soul, with innovative, and distinctly modern, R&B, Afrobeat and Reggae. When asked, “Where do you go from here?”

TEFO shares that music is infinite. No matter the sound or rhythm, it never grows tired or outdated. Music is that energy that binds people together from all walks of life and backgrounds. It speaks every language. It has that magical power to touch every heart. As the great Bob Marley has said “When the Music Hits You Feel No Pain.”

– Worked with artists such as RUTH B,