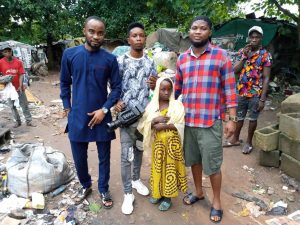 Although significant progress has been made in the fight against Tuberculosis – an infectious killer airborne disease that has been underscored as unprecedented world’s most infectious killer disease; however, a more holistic measure still needs to be taken to close in on this thief of life, that is not a respecter of any man.

Against this backdrop, Godspower Oshodin Global Foundation a not-for-profit humanitarian organization and Mirror Multimedia Network, a Lagos-Nigeria based media company are pulling talents, resources and man-power together, to take a fight to the door step of this killer disease, with Nigeria as a major catalyst.

Nigeria, according to World Health Organization (WHO) is said to be the far worse hit by this global epidemic in Africa.

An estimate of at least 18 Nigerians are lost to TB every hour. When 47 Nigerians develop active TB, at least 7 of them are usually children.

A report by WHO reveals that about 2 million people die from TB yearly and 10.4 million new cases of TB were reported in 2016, with seven countries responsible for 64% of the burden. These countries are India, Indonesia, China, Philippine, Pakistan, Nigeria and South Africa.

Founder of Godspower Oshodin Global Foundation, Mr. Godspower Oshodin, in a press statement made available to news men revealed that ahead of the 2030 deadline proposition by world leaders to end Tuberculosis globally, his foundation in partnership with Mirror Multimedia Network, are stepping into the ring to join the fight against the disease that is reported to claim not less than 4,500 lives daily in Nigeria.

“It has become a call to duty for us, as a collective people with an advantage of some sort to lend a hand in rescuing our brothers and sisters from the jaws of the dreaded killer disease known as Tuberculosis. To think some of us are safe is like sitting on a gun powder, because, the continuous spread of this pandemic puts all our lives in jeopardy,” he explained.

Speaking further, Oshodin who is a United Nations Online Volunteer reiterated the claim by WHO that Nigeria currently ranks 7th in the world and 2nd in Africa among the 30 countries with the highest burden of TB, TB/HIV, multi drug resistant TB.

“A lot of attention and funds have been placed on HIV/AIDS, but ironically, TB according to WHO has now claimed more lives than HIV/AIDS and Malaria patients. More interestingly, TB has been detected to be responsible for death of most HIV positive people.”

Shedding more light on their strategy, Mr. Seunmanuel Faleye, humanitarian and media entrepreneur explained the essential role of the media in the fight, and more succinctly, he casts a spotlight on the strategy that his alliance with GOGF would be engaging in this fight.

“It is regrettable and distasteful to know that numerous numbers of souls is being lost daily to Tuberculosis due to non-detection and late detection. This is largely because so many are still not aware of these epidemic. Hence, our approach to this campaign which we are commencing in November 2019, shall take two phases.

“Firstly we are going to be filming a documentary titled ‘SPREAD – the tuberculosis story’. The documentary will take the narrative fiction style. We believe the viewers will connect more with this style of documentary. Our aim with this documentary is to teach Africans simple lessons, which are; ‘What are the Symptoms of Tuberculosis, What to do next once these symptoms are noticed, and more importantly is that Tuberculosis can be treated and that the treatment is free.

“We will translate these documentary into Igbo, Urhobo, Hausa, Yoruba, Edo, Pidgin English, Kanuri and Tiv,” Faleye explained. According to him, the aim of these eight translations is to ensure demographic penetration across the country.

Corroborating Faleye, Oshodin hinted that they would be having a nationwide crusade against Tuberculosis, and they’ll tour with acredited medical experts who have shown interest in partnering on this campaign.

In his words, “During the campaign, we shall screen the documentary to our host communities in town hall meetings, in languages they’ll understand and relate with. Afterwards, our medical team will begin consultation, diagnosis and drug administration as required.”

Faleye remarked that to ensure these campaigns are successfully run, supports are required from well meaning Nigerians including; World Health Organization, Office of the first lady of Nigeria, who also doubles as the ‘as ‘Global Ambassador for Stop TB Partnership In Nigeria’.

In conclusion, Oshodin quipped that some select A-List Nigerian Celebrities and influencers would be unveiled soon as ambassadors of the campaign against Tuberculosis.

“…Ofcourse, we are bringing a selected host of top Nigerian Celebrities from various Industries who would join in the Campaign as ‘SPREAD Ambassadors’.

These Celebrities would be unveiled during our World Press Parley in December.”