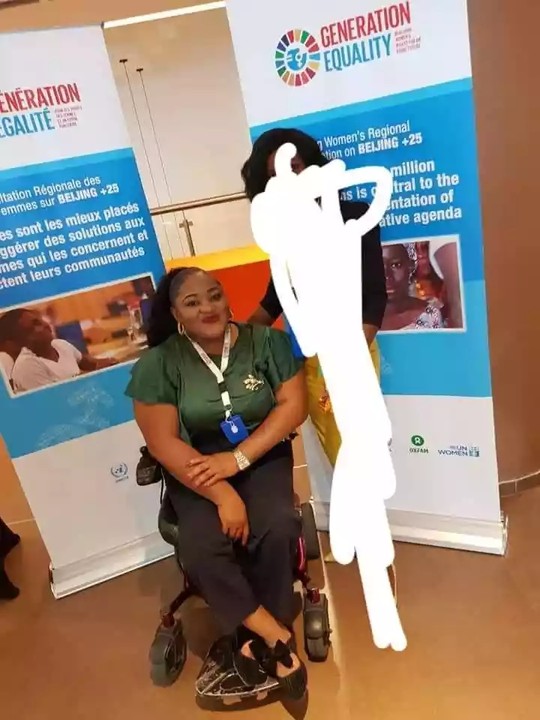 A physically-challenged Nigerian lady, Blessing Mary Ocheido, has called out Asky Airlines, accusing them of destroying her wheelchair without fixing it.

Read what she wrote below:

On the 15th of August, 2019, I flew Asky from Abidjan to Abuja and on landing at Nnamdi Azikwe Airport, I discovered that my wheelchair’s hand control had been shattered beyond repair. I called the attention of the manager and he reluctantly agreed to fix it.

On the 13th of September, almost a month later of begging and calling the Asky front desk, an Asky staff member brought the hand control to me that it has been fixed when in actual fact, it was just a paper tape that was wrapped around the shattered hand control. I was shocked beyond belief but still took my time to explain to him how what they had done was a great insult as well useless.

Since then, Asky Airlines has done nothing about it. I kept telling them I travel often and I need my wheelchair as a matter of neccesity and they would promise to fix it but won’t call again. Eventually, they told me to find someone to fix it and they will pay. An older, very good friend of mine reached out to the person who fixes her own wheelchair and he said the hand control was beyond repair and that he has to get a new one, do this and that.. and so drew up an invoice and sent it to me. I immediately forwarded the invoice to Asky on October 16, 2019 and told them to hurry as I had another trip coming up in about 2 weeks. The message went unattended to. I will call and they won’t pick up. Then they called and said the invoice had been forwarded to the manager and he “will see what can be done about it.”

I implored the aforementioned friend to call them as well but they did not pick her calls. On October 26, 2019, I was to travel to Addis Ababa with Ethiopian Airlines but they refused to send their wheelchair out to me. That I can only come to the counter to be issued a wheelchair; also that their policy forbids them to bring out wheelchairs to customers and that as a customer with disability, I ought to already have my own means of mobility. Guess what? Their counter is on the second floor of the intertnational wing.

Four people including 2 airport officials went up to Ethiopian Airlines counter with my passport to beg for a wheelchair on my behalf and I was denied still. I struggled up until I stopped out of sheer exhaustion. I missed my flight. An airport security guard, on seeing me, got angry and went up to seize a wheelchair for me.

When I approached the Ethiopian Airlines manager, he apologised profusely and rescheduled my flight for the next day at no extra cost to me.

After this was settled, I went to Asky’s Counter and asked for an update on my wheelchair. They kept making vague promises and saying their manager was not around. With tears in my eyes, I explained how their negligence had cost me a flight, two important meetings and all the stress and pain I have had to endure since August. They still said nothing of worth. I returned the next day and insisted I wasn’t traveling without a wheelchair. Guess what? After hours of waiting, they brought out an ancient wheelchair that I cannot move on my own, leaving me at the mercy of strangers to get around.

This is one of the most cruel and insane things I have ever gone through in my entire life, especially as I do not have a single blame. Asky has treated me despicably and without an iota of consideration for my rights or welfare.

I intend to stage a protest upon my return. Right now, I am no longer demanding to have my hand control fixed because it does look beyond repair. I am demanding a brand new motorised wheelchair for all the trauma and disregard I have suffered since August 15, 2019. Everyone knows how very expensive motorised wheelchairs are and seeing as I’m not rich, I cannot just up and buy another.

I am calling on well-meaning Nigerians to help me fight this aviation company that believes persons with disabilities do not count, from the way our mobility aids are manhandled to how cases of damaged properties are resolved. If you are a lawyer willing to take up this case, I beg you to help me please. Injustice to one is injustice to all.