Davido has blasted TBoss for her comments on the video showing the girls who accused him of impregnating one of them in handcuffs, Praizenews report.

TBoss in a video condemned Davido and his crew for handcuffing the girls, saying they had no right to do that instead they should have reported to the Police.

She had said the act was primitive. Several reactions followed the video which went viral today and this got Davido to react. 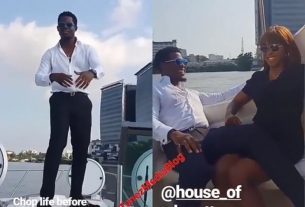 Seyi Awolowo And Adeshola, His Girlfriend On A Boat Cruise (Photos)