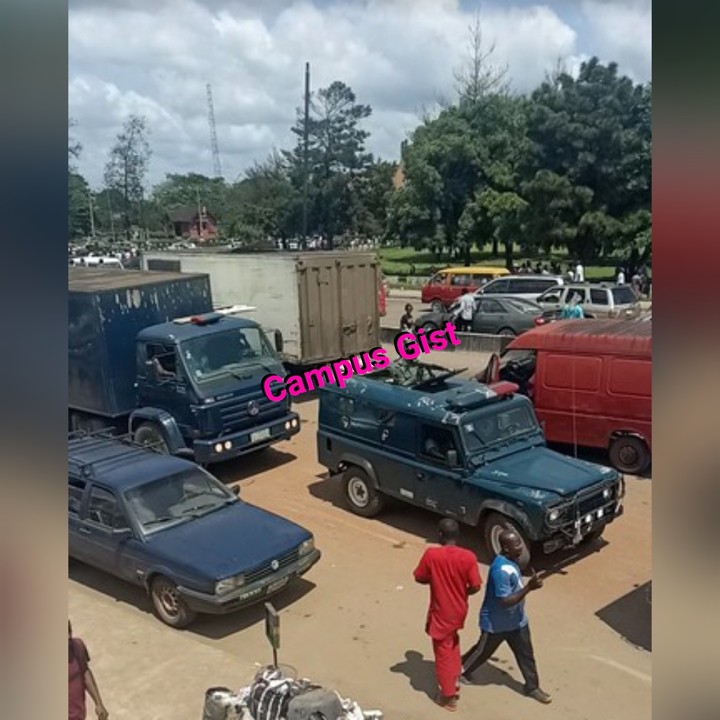 Students of the University of Benin, on Friday blocked a bullion van belonging to the Central Bank of Nigeria (CBN), temporarily halting its movement.

The protesting students equally stopped some vehicles belonging to the Nigeria Army, which were part of the CBN’s convoy.

CAMPUS GIST reports that the students were protesting failure of the school management to restore electricity and water in their hostels, as well as deplorable roads in the school.

They also decried the state of disrepair of their hostels, which they said are characterized with leaking roofs, poor toilet facilities, untidy environment and overgrown weeds.

Some part-time students later joined in the protest, claiming they have not received lectures for the past three months since their lecturers were being owed salaries.

The students had earlier shut down all gates leading to the university main campus, depriving staff of the institution from leaving or going into the school premisses.

The protest which commenced at about 6.a.m on Friday halted vehicular movements in and out of Benin en route the ever-busy Benin-Lagos expressway.

This is even as the students in their numbers chased away all members of the management team, who attempted coaxing them into abandoning the protest.

Those affected include the institution’s Dean of Student, Chief Security Officer, Head of Intelligence and a church chaplain in the school.

The Student Union President, Idehen Charles; PRO, Godwin Okafor would have been lynched but for the quick intervention of the police.

The protesters, who had since converted the Benin-Lagos expressway to a football pitch, were later supplied with water to quench their thirst.

Our correspondent observed that many travelers to and from Lagos were forced to take to other alternatives, including the popular Benin bypass.

The protesting students later voluntarily withdrew from the expressway, with a promise to return on Monday if their demands are not met.

Friday’s protest which lasted for over 7 hours (6:00am – 1:15pm), is the longest protest ever recorded in the history of the University of Benin.

The current administration led by Prof. F.F.O Orumwense, as vice-chancellor, is said to have recorded more protests than all previous administrations combined.