5 Facts You Should Know About The Efik People 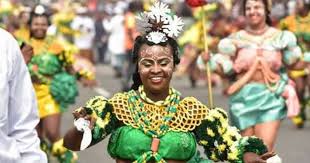 Have you ever visited Cross River State in Nigeria? If not, you should do so soon because the state is filled with diverse ethnic groups, beautiful places and amazing people. Today, we’ll be taking a trip down memory lane to understand one of the ethnic groups in this beautiful state, the Efiks. The Efiks are one of Nigeria’s most prevalent and interesting ethnic groups. The people predominantly occupy the south of Cross River State and speak Efik. But before they became the Efiks we know today, they had an origin, traditions and lifestyle – some extinguished but some maintained. Below are some historical facts about them:

ORIGIN: The Efiks are believed to be originally from Uduak Eset (Isangele) in Cameroon before they migrated to Nigeria as far back as 8,000 BC.

ECONOMY: Although their economy was originally based on fishing, they quickly developed into a major trading region, trading slaves and agricultural products like palm oil, cassava, yam etc. in exchange for European manufactured goods in the 17th to 19th
century.

EDUCATION: The Efik and indeed the people of the Old Calabar Kingdom were the first to embrace western education in Nigeria, with the establishment of Hope Waddel Training Institute, Calabar in 1895 and the Methodist Boys High School, Oron in 1905.

TRADITION: The Efik had interesting traditions with one of them being the Fattening Room practice. Here, virgins were overfed, massaged and made to sleep for long periods to become the perfect, robust bride. A modified version is still practiced today. Men also belonged to the secret society, Ekpe which was named after a forest spirit. Members were the guardians of the peace and the messengers of the ancestors. Their activities included making laws and punishing offenders. The teachings of Calabar’s first Missionary School thankfully brought an end to the group’s additional activity of human sacrifice. Another tradition that was fortunately brought to an end was the belief that twins were a disgrace to Abasi (God). It was thought to be evil for a woman to give birth to twins, the twins were taken and left for dead in the forest.