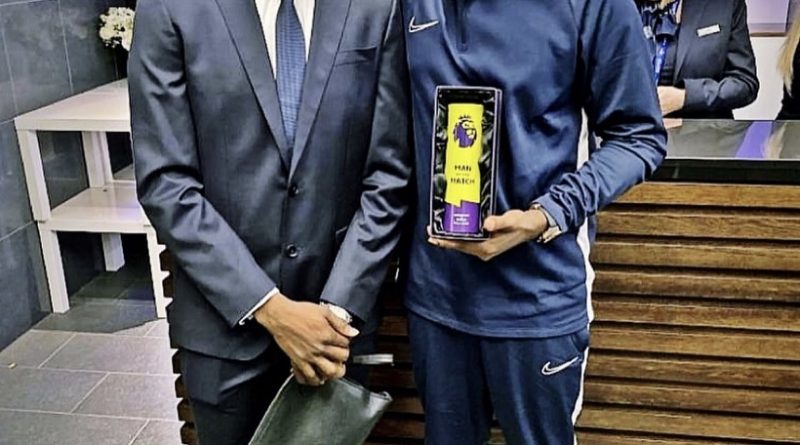 The Premier League returned on the 17th June after every top-flight club approved the proposed matchday protocol.

And it is for that first round of fixtures, starting with Aston Villa vs Sheffield United and Manchester City vs Arsenal, that they had their kits proudly modified.

Players from across the league have already shown their support for the Black Lives Matter movement, kneeling during training sessions and even before games – such as Arsenal before their 3-2 loss at home to Brentford.

It was in effect for the opening 12 games of the restart of the league, and when names returned a BLM logo is featured on shirts and this will run for the rest of the season.

A statement from players at all 20 clubs including Nigeria and Super Eagles superstar Kelechi Iheanacho read: “We, the Players, stand together with the singular objective of eradicating racial prejudice wherever it exists, to bring about a global society of inclusion, respect, and equal opportunities for All, regardless of their colour or creed.

“This symbol is a sign of unity from all Players, all Staff, all Clubs, all Match Officials and the Premier League #blacklivesmatter #playerstogether.”

They have already supported stars who decide to “take a knee” before or during matches.

Despite expectations, a firm position was agreed, club bosses agreed to leave detailed discussions to the league executive.

The club chiefs, meeting virtually for the 12th time since the Premier League was shut down in March, signalled their determination to show strong support for the worldwide campaign.

But it was felt it was vital clubs ensured their next steps met the wishes and message the players, who represent the public face of the league to millions of fans around the globe, want to send.

Though there were concerns any show of support for the movement would be pointless unless the league’s action has already been backed by the players.

League chiefs spoke to representatives of the players at all 20 clubs, seeking their input and observations about potential measures.

These are understood to include a clear statement of the League’s support for the campaign as part of a pre-match collective kneel, plus prominently messaging inside stadiums.

Manchester City’s Raheem Sterling said it was a “massive step” that players took a knee in support of the Black Lives Matter movement on the opening night of the Premier League’s return.

The Premier League returned after a 100-day hiatus because of the coronavirus pandemic.

And players and officials showed their support for the movement for racial equality following the death of George Floyd in the United States.

Floyd, a 46-year-old unarmed black man, died as a white police officer held a knee on his neck for nearly nine minutes. His death sparked protests around the world.

Manchester City manager Pep Guardiola said: “White people should say sorry for the way we have treated black people for 400 years. I am ashamed of what we have done to black people around the world.

“It is not only in the USA where it has happened. The problem is everywhere.

“Maybe for our generation, it is too late but for the following generations, they can understand the only race is ourselves. We are human beings. It doesn’t matter the colour of our skin.”

Colin Kaepernick started kneeling symbolically during the pre-game national anthem in the NFL in 2016, in protest at police violence against African Americans in the United States.

Former Crystal Palace striker Clinton Morrison said the moment players took a knee in the opening game of the restart was “special”.

He told BBC Radio 5 Live: “That touched my heart. I didn’t expect that. It was magnificent. Credit to both sets of players and staff.”

Former Arsenal and England striker Ian Wright said Premier League players wearing ‘Black Lives Matter’ on their shirts shows the league wants to be on the right side of history.

“What the Premier League have done, is to give them the power,” said Wright, who was sent racist abuse on social media last month.

Research by UK Sport and Sport England last year found that black, Asian and minority ethnic (BAME) people accounted for just 5.2% of board members across the 130 sports organisations they fund, including the Football Association.

According to the 2011 Census, about 13% of the population of England and Wales is from a BAME background.

Watford captain Troy Deeney has thanked the Premier League for giving the Black Lives Matter campaign such a high-profile platform.

Deeney told Sky Sports News: “We have to thank the Premier League for giving the players the opportunity to speak, a platform, and they are side by side with us.

“I’ve been in a lot of meetings and I’m very grateful to them for that, but now I feel there’s a lot of pressure on the media and players to keep the conversation going and keep it in the public domain.

“We’ve seen before with other campaigns, like Kick It Out, they’re very much (talking about it) one week and you don’t hear anything about it for the rest of the year.

“We want to make sure this conversation continues.” Wilfred Ndidi said.

The Black Lives Matter protests, sparked by the death of George Floyd in the United States last month, have been given prominence in English football.

We really hope this doesn’t fade out after the season.