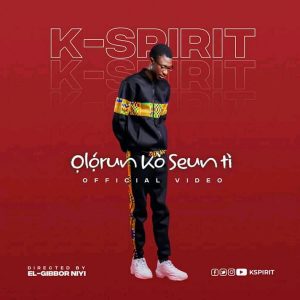 Directed by the excellent cinematographer Elgibbor Niyi,  Olorun ko seun ti  video is coming on the  heels of its audio which was released in 2019 after it increasingly became a great tool of encouragement, hope and faith to its listeners all over the globe.

Produced by the world-class I-fee Sound, with the atmosphere electrifying Minister Dunsin Oyekan also featuring in the audio, Olorun koseun ti  is a song of worship to the God of all flesh, with Whom nothing is impossible, nothing is too late, and nothing is too difficult.

Olorun ko seun ti is a Yoruba expression for ‘’ The God who does not do a thing to a point of not being able to successfully do the thing’’ and in modern day parlance,’’ The Impossibility Specialist God’’.

To some, who have witnessed Olorun koseun ti show Himself strong on their behalf , this video is a personal testimony.

To others, whom Olorun koseun ti is still working on their case , it is a declaration of trust, faith and confidence in His ability to deliver based on His track record.

The video tells the story so vividly and brings it home to any one irrespective of their cultural background or geographical location. Each scene is just meant for someone somewhere somehow!

Hear KSpirit’s testimony : ‘’This song means a lot to me, and I hope it does to you too, as it came at a point in my personal life when I was going through a situation that only a never-too-late, miraculous God could bring me out of. More so, it is a major reminder of a personal and real encounter of how Olorun Ko seun ti saw me through one of the darkest periods of my life as a student in medical school. Today I am glad to say, He revealed Himself to me and He is still revealing Himself ,as Olorun ko seun ti . As you watch this video and sing the song, I am confident that He will also show up in your life and situation as Olorun ko seun ti’’.