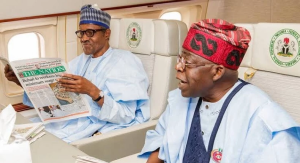 Buhari said this in an interview in the United Kingdom on Wednesday, November 10, 2022, after meeting with King Charles III at the Buckingham Palace.

When asked about the 2023 election, Buhari expressed confidence that the presidential candidate of the ruling All Progressives Congress (APC), Bola Ahmed Tinubu, would win the forthcoming election.

“What are the chances of my party not winning the election? We are going to win the election.

“Tinubu, the presidential candidate, a very well-known politician in the country, he was a two-term governor in Lagos State, the most resourceful state and the most visited state. So, I think the party was lucky to get him to be the candidate,” Buhari said.

On his meeting with King Charles, the president said their conversation focused on strengthening the bilateral relationship with the United Kingdom.

He said the monarch was very interested in Nigeria “maybe because of Nigeria’s relationship with Britain for long, our economic strength, I think we’re still of great attachment to them.”

The president also told King Charles that he did not have a house in the UK.

“He (King Charles III) asked me whether I have a house here (in the UK), I said no, I live in Nigeria alone, the only house I have are those I have before I got into government and I’m not very much interested in having houses all over the place. I feel much freer when I have nothing,” he said.

The president also urged Nigerians to vote for whoever they like from whichever political party.

He added that nobody would be allowed to mobilise resources and thugs to intimidate people in any constituency.

AEROLAND – PROFILE & BLUEPRINT OF A MAN WHOSE TIME HAVE COME