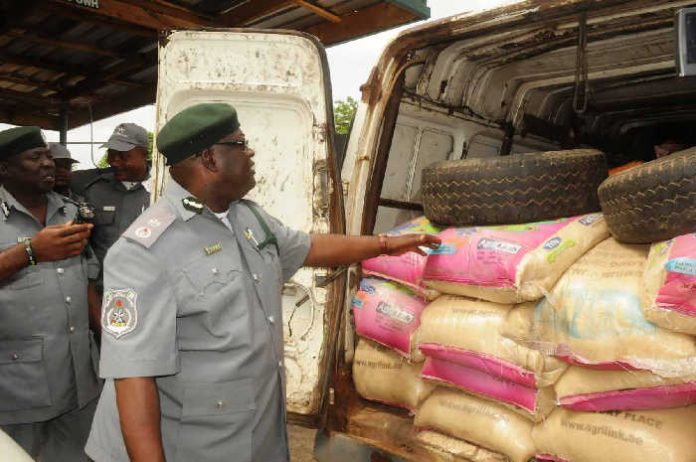 Eyes Of Lagos gathered that, The unit also said it intercepted 1,239 cartons of fake viagra, sexual enhancements drugs with N409million and smuggled foreign parboiled rice worth N36.4million along the border.

FOU, is an anti-smuggling unit of the service in the South-Western part of the country and is saddled with the responsibility of serving as the last layer for smuggled or under-declared cargoes at the seaports or land borders.

However, taking journalists round the seizures yesterday, the Customs Area Controller of the unit, Compt. Mohammed Aliyu said the cargoes were intercepted on the highway. Speaking further, he said 2751 bags of rice worth N36.4million and 147 pieces of used tyres worth N1.02million were also intercepted by the unit.

He said, “the duty paid value of interceptions were N458million and we will not relent our effort until smuggling is suppressed to the barest minimum in the south west”.

“You can see, I told you the last time we came for the conference that smuggling will be suppressed because my officers are on their trail, anywhere they hide we shall get to them.”

It would be recalled that last week, the unit intercepted contrabands such as vehicles, pharmaceuticals and foreign parboiled rice worth N1.2billion from smugglers. The seizures include six vehicles namely, Toyota Tacoma, 2 Lexus ES350, 2 Toyota Highlander and Toyota Hilux with Duty Paid Value (DPV) of N242million were intercepted.

Also intercepted are 1698 cartons of Powermantlets, 671 kg of pangolin scales and 5, 226 bags of smuggled foreign parboiled rice all with Duty Paid Value of N1.01billion. He said, “Within a week, because of the motivations we just got which made some impact, we have intercepted six cars worth over N242million at various border points and various car mart.”