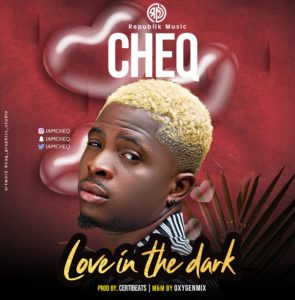 Cheq releases his first official single, titled “Love In The Dark”. The artist who recently joined Republik Music, chose “Love In The Dark” among all his recorded songs in order to send a message of love trust, and new beginnings, which is what he intends to find in the Nigerian music industry.

Akinsanya Olamilekan became known as Cheq in his early days as a music producer, as he would run several mic checks before commencing any recording. Such was his attention to detail and strife for perfection that he got frustrated with producing empty songs for other musicians, and decided to get on the microphone himself, and spread his message

Republik Music discovered Cheq during a studio jam session with various artists. He stood out with his delivery and instantly won a work contract with the Lagos-based record label, and eventually signed a record deal.

Love In The Dark talks about the relationship between a woman and a man who meet for the first time, and want to get involve for the longterm. The song is written by Cheq, and produced by CertiBeats. It’s a slow, soulful tune with an Afro vibe. Download and listen to Love In The Dark, and don’t forget to follow @IAmCheq & @RepublikMusicGP on all social media platforms for more music, and more info on what’s coming from the artist and label.