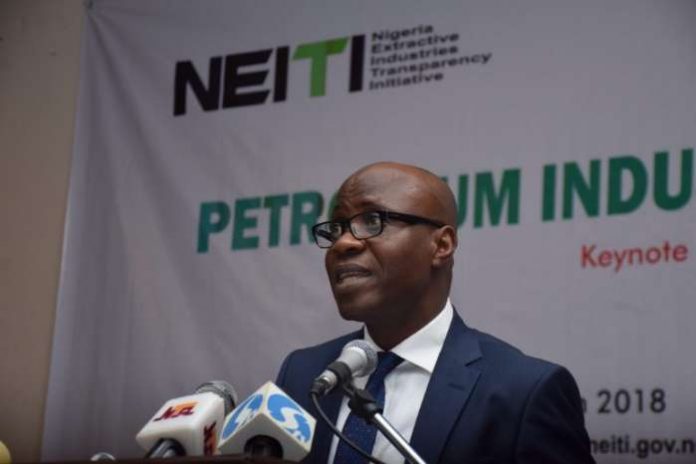 The Nigeria Extractive Industries Transparency Initiative (NEITI) in its latest report released in Abuja on Sunday reveals that the solid Minerals sector contributed N52.75 billion to the federation revenue in 2017.

NEITI says the information and data sprang from an independent reconciliation of company payments and government receipts in the sector.

NEITI, however, noted that “except for revenue from MID, there was significant increase in revenue from all other streams” in 2017.

While underlining the importance of a comprehensive action plan to shift attention from oil to the development of the solid minerals sector in the face of dwindling oil revenue, the report noted the significant reforms and development in the sector. Some of them include:

— Increased funding to the sector from various sources from N1billion in 2015 to N7 billion in 2017;
— Approval of ₦30 billion ($100 million) as intervention fund to facilitate exploration projects towards the much-needed geosciences data and other regulatory framework;
— N5 billion support fund launched by the Bank of Industry for small-scale miners at 5% interest rate;
— A $150 million loan secured from the World Bank for the Mineral Sector Support for Economic Diversification Project (MinDiver) which became operational in 2017;
— Inauguration of a project delivery team (PDT) to invigorate the coal sub-sector and concession of coal blocks of the Nigerian Coal Corporation as part of MMSD’s contribution to the energy policy in other to increase the contribution of coal power plants to 30% of the nation’s electricity by 2020;
— Discoveries of some mineral deposits in 14 states have led to an appreciation in Nigeria’s limestone resource base from 2.3 billion tonnes to 10.6 billion tonnes making Nigeria sufficient in cement production;
— An estimated 4.8 billion tonnes of Marble was found in the FCT, Nasarawa, Ondo, Edo, Oyo, Kogi, Kwara, Niger and Kebbi states;
— Engagement of M/S Fugro by MMSD to carry out aeromagnetic survey covering various mineral deposits across the country with discoveries made on the existence of base metals in Ebonyi State, gold in Osun and Kaduna states;
— Acquisition of diamond core drilling rigs and assaying equipment by MMSD for the National Steel Raw Materials Exploration Agency and the Nigeria Geological Survey Agency (NGSA), which would aid gathering of more credible geosciences data;
— The MCO has been decentralized, upgraded and six zonal offices established; the MCO has introduced online mineral title administration to ensure transparency and improved turn-around time in mineral title processing from 45 days to 15 days;
— The strict implementation of the “use it or lose it” provision of the Minerals and Mining Act, 2007 that stipulates the revocation of non-performing or defaulting mineral titles to curtail the activities of speculators.

Eyes Of Lagos gathered that, According to NEITI, “A trend analysis of the revenue flows showed that there has been a very remarkable increase in revenue accruing to the Federation from the solid minerals sector from 2013 to 2017, though 2016 witnessed a decrease of 31.02% compared to 2015.”

Other revenue flows from the solid minerals according to the NEITI report, include sub-national payments. These are direct payments to states and local governments as a result of national laws, contractual obligations or local regulations which are disclosed as unilateral disclosures by the extractive companies.

“The total payment was ₦2.877 billion representing about 5.45% of total government revenue from the sector,” NEITI stated.

On production, the NEITI Solid Minerals Report disclosed that 35.33 million metric tons of minerals valued at N32.78 billion was produced in Nigeria during the same period.

“The production data was based on minerals either used or sold during the year,” the report stated.

On state-by-state contribution, the report highlighted that Ogun State produced the highest quantity of minerals in terms of both volume and value.

A further analysis showed that the two states led in Limestone as major minerals produced in the states. However, in terms of production value, Ogun, FCT and Kogi states accounted for 23%, 20% and 18%, respectively.

The NEITI 2017 Solid Minerals report also revealed that Dangote Cement dominated activities in minerals production in 2017. The company alone was responsible for about 46% of the total minerals production that year. Other big players in the sector included Lafarge Cement Plc., CGC Nigeria Limited and Julius Berger Plc.

“The four companies produced over 27 million tons of minerals, representing 77.31% of the total minerals production quantity and over 60% of the production value,” the report says.

The sector’s contribution to employment in 2017 was about 0.3% of Nigeria’s total employment, same as the figure recorded in 2016. The report also affirmed that artisanal and small-scale miners currently dominate the sector.

On the solid mineral sector’s contribution to exports, the NEITI report stated that about 16.34 million metric tons of minerals valued at $29.90 million was exported in 2017.

According to the report, “Nigeria’s total export was about ₦13.60 trillion with solid minerals contributing N77.23 billion or 0.57% of total export in 2017.”

The trend analysis shows that in 2015, solid minerals export was N1.94 billion. This witnessed a geometric leap to N11.16 billion in 2016 and an equally impressive figure of N77.23 billion in 2017. This is an indication that the solid minerals sector is steadily contributing to the federation’s export earnings but requires greater government attention.

The report also disclosed, “5he major destination of Nigeria’s export during the year under review is China. The country accounted for 68% of the total export value during the year”.

Other destinations are Malaysia, Vietnam and India. The report, however, observed that export data received from the Nigerian Customs Service (NCS) include minerals that were not captured in the production data provided by the MID as well as inconsistency in FOB value of minerals.

Eyes Of Lagos gathered that, The report also contains comprehensive information and data on how many licenses were issued as well as gross revenues that accrued to the federation account from both oil and non-oil sources for the year 2017.

It asserted that while Nigeria’s gross revenues stood at ₦7.35 trillion, revenues specifically from the solid minerals sector represented only about 0.05%. The report explained that the absence of an industry-specific fiscal regime made it difficult to tie revenue flows from the solid minerals industry to the federation account. According to the report, the development equally affected efforts at quantifying the contribution of the solid minerals sector to Nigeria’s GDP, which presently stands at current basic price of ₦113.72 trillion. The report however highlighted that the sector’s contribution to GDP was an abysmal 0.11%, which showed a decline of 0.01% and 0.02% from the data of 0.12% in 2015, and 0.13% in 2016.

The report further explained that out of 1,072 entities covered by the exercise, only transactions by 59 companies were reconciled. These 59 companies accounted for over 86% of the total royalty payments made by the sector in 2017. Royalties paid by fifty-nine (59) companies in 2017 was N1.3billion as against the N1.4 billion paid by fifty-six (56) companies in 2016 resulting in a decrease of about 7.7% in revenue. This may be an indication of lower investment in mining activities in 2017.

On payouts to the federating units from solid minerals revenue, NEITI stated that the last distribution of solid minerals accumulated royalties occurred in July 2016, when the sum of ₦9.92 billion was distributed by FAAC.

The NEITI report, among its many recommendations, called for closer inter-agency collaboration specifically between Nigeria Customs Service and the Mines Inspectorate Department in revenue collection and management in efforts to develop the industry. The transparency agency reminded companies to provide their annual financial statements as failure to do so would attract sanctions based on the NEITI Act of 2007.

The independent audit of the solid minerals sector is consistent with NEITI’s mandate under the NEITI Act 2007 and in fulfillment of Nigeria’s obligation to the global Extractive Industries Transparency Initiative (EITI) as an implementing country. Data for the report was obtained from extractive industries companies and seven government agencies: the Central Bank of Nigeria, Bureau for Public Enterprises, Mining Cadastral Office, Mines Inspectorate Department, Federal Inland Revenue Service, Nigeria Customs Service and Federation Account Allocation Committee.