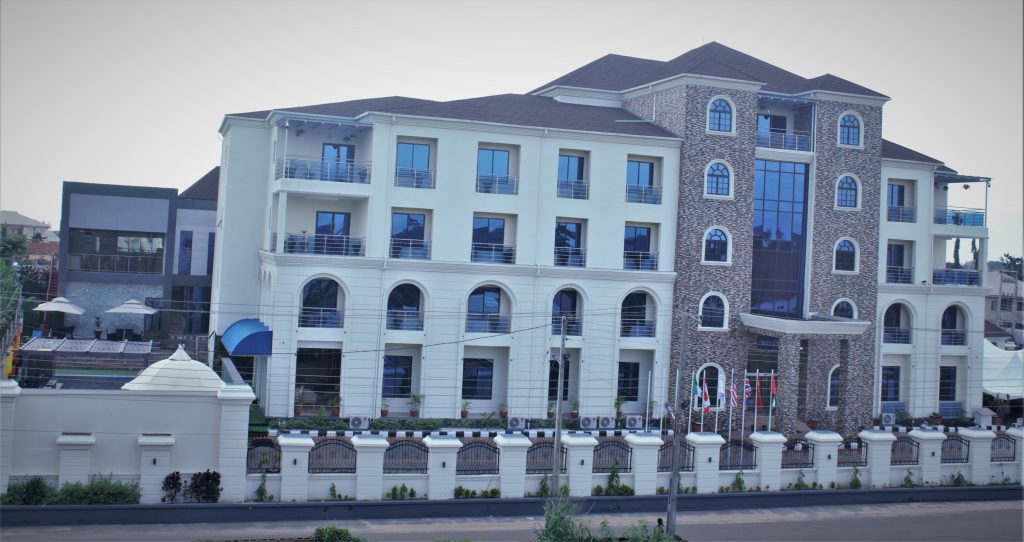 Knowing full well that the best hospitality offered leaves a lasting impression and memories,  Dubai business mogul and Chairman of Jacob Family Investment Ltd, King Babatope Jacob Abayomi Adebiyi brought a world-class hotel to the city of Akure, Ondo State, Nigeria.
St. Jacobs’ Hotel, now the cynosure of all eyes in and around Alagbaka GRA, is a luxurious edifice with 45 executive rooms, 5 royal suites, 5 diplomatic suites and one presidential suite, is located in a serene environment and poised to give its lodgers utmost comfort.

The hotel, embodied in opulence, reflects the owner’s high taste and hospitality. Described by many as one of its kind in Southwest Nigeria, it is blessed with a grandeur reception, life gym, laundry, water fountain carved out of a rock, serene poolside, an exotic restaurant, exclusive lounge deluxe rooms and beautiful artistic images depicting Africa’s rich culture and nature are a few of the numerous fascinating things that are readily available to delight guests.

On Saturday, 20 September 2020, King Adebiyi hosted top officials, business tycoons, industrialists and dignitaries to the official opening of the edifice, with pervading cheers and honour in the air for him and his family.

Basking in the euphoria of the great achievement, he could not but give glory to God for the successful completion of the project which, according to him, was conceived five years ago. Shortly after, the hotel was opened by the Governor of Ondo, Arakunrin Rotimi Akeredolu (SAN) alongside the Deji of Akure, HRH Oba Aladetoyinbo Ogunlade Aladelusi and the Olowa of Igbara-Oke, Oba Adefarakanmi Agbede.

The event began with an opening prayer by Pastor Dele David, followed by a welcome address by Mrs Taiwo Adebiyi, the CEO’s wife, who warmly welcomed guests and acknowledged the presence of the royal fathers and the special guest of honour, Governor of Ondo State, Arakunrin Rotimi Akeredolu (SAN).
In his goodwill message, Mr Tope Ogunrinde commended the CEO’s doggedness towards the great achievement. Governor Akeredolu, a passionate advocate of industrialisation, in his speech, thanked the CEO for choosing Akure for such a laudable project as well as creating job opportunities for people. Amidst prayers and appreciation for the honour bestowed on him to open the facility. He further enlivened the facility tour with rib-cracking jokes and commendations.

Thereafter, prayers for the CEO, staff members and management were said, after which the vote of thanks was proposed by Mrs Taiwo Adebiyi.

At the exotic restaurant were guests being treated to a delicious buffet, an all-you-can-eat of both local and continental dishes.

The Deji of Akure, Oba Aladelusi in his interview with Spotlight Africa Magazine at the end of the event, applauded the Chairman of St. Jacobs’ Hotel for establishing such a laudable investment in Akure. Describing the city as a peaceful place, he encouraged Akure’s sons and daughters abroad to come home and invest in the city.

Meanwhile, a grand supermarket, salon, and restaurant are a few other features of the much-anticipated annex of the hotel currently under construction. Without a doubt, this will pave the way for a lively atmosphere engendered by the ease of shopping for residents of Alagbaka and neighbouring areas.

#AfricanEmpireRealityShow: SAY HELLO TO THE GLADIATORS!